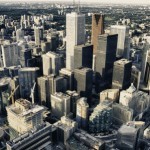 Architecture has a long and winding evolution that’s full of creation, adaptation and destruction. In the United States particularly, architecture is young with overall modernity but unique diversity. Many external forces have affected the way US cities were designed and built.

When settlers arrived from European, colonial style homes and buildings were built along the east cost. Constructed with available resources, these buildings that still exist in some cities today are made of wood and brick. In the late 1770’s upon signing of the Declaration of Independence, construction began on governmental buildings.

In an effort to stray from British roots, new architecture features pillars, columns and domes. This style of architecture is directly reflected in the White House. Throughout the years to come there would be sporadic construction of Greek and Victorian styled homes and buildings as the United States expanded through North America.

The first skyscraper was built in 1873 in New York City. This architectural advancement would force cities to choose between their aged, traditional buildings and starting over to build these new skyscrapers that added more real estate expanding up rather than out. NYC and Toronto choose the latter. These cities bulldozed old buildings to make room for apartment and office skyscrapers.

However, cities like Buffalo and Chicago held onto some of their original architecture instead of replacing it with skyscrapers. Original churches, schools and historical homes from before the cities were even incorporated can all be found in these cities. Made of their original wood and brick, they stand out among more modern homes and inevitable steel construction.

Today, there is value in the colonial, Greek and Victorian buildings that are far and few between in the United States. Full of character, hard work and history these buildings are now being preserved and restored to keep beauty and functionality in tact. Years down the road, cities may not be full of skyscrapers, but the antique buildings that survived architectural evolution.